Since its inception in June, 2013 Operation Medical conducted its first mission trip to the Hospital Pierre Payen (HPP) in Haiti. During the mission, the team performed 40 surgeries, including four emergency procedures. The team also assisted in kicking off a new surgery to this facility – cataract removal and alongside local staff completed 39 cases. In addition, more than 70 ultrasound procedures were done and many lab tests were run. 200 patients were examined and screened for future surgeries at the medical clinic. This mission led to great progress for HPP which has endured tremendous hardships since the earthquake in January 2010. John Judson, M.D., team leader was instrumental in making this trip a success. Dr. Judson, who serves as the Vice-President of Operation Medical is no stranger to Haiti. He lived in Haiti for two years and has made numerous short-term trips since 1968. Dr. Judson stated that “This mission would have been totally impossible without Operation Medical. The coordination with them was critical to the success of the mission.” While the first trip under the flag of Operation Medical, this team of volunteers has made 4 trips to this hospital and they were very pleased to see the progress being made.

Pierre Payen The city of Pierre Payen, Artibonite is located 1.5 hours from Port-Au-Prince, the capital city of Haiti. The hospital is operated by Operation Help which has been there since 1967, operating a large school and many community projects. In addition to traditional evangelising and church planting, Project Help has focused its efforts on education, health care, agriculture, and community development. This facility was opened in 1979 as a medical outreach compound, 45 minutes from Borel. Borel is in close proximity to Hospital Albert Schweitzer so medical care is more available there. The hospital in Pierre Payen was built in 2000 and surgical care became available. Unfortunately, full-time surgeons were not available. Since the earthquake that devastated Haiti in 2010, visiting surgical teams have visited the hospital about 6 times a year. Over the four years that Dr. Judson’s team has visited HPP, they have observed tremendous progress in the function of the hospital and the efficient use of the surgical team.

The medical/surgical mission was held at HPP from October 19 through November 3, 2013. The staff of HPP and our volunteers worked together seamlessly under the supervision of Operation Medical’s Team Leader and surgeon, Dr. John Judson along with the “backbones” of the group, team co-founder Chip Goodhart, CRNA, and Jen Stoner, pharmacist. They prepared for the mission and provided experienced leadership while on site.

The group stayed in a comfortable guest house and was nourished every day by delicious food that was prepared with great expertise by Haitian cooks. Despite the dormitory style sleeping and cold showers, the team remained in great spirits. Four translators, fluent in English and Creole were used to communicate with the Haitian people for the team.

Professionals trained in OB/GYN, General Surgery, Ophthalmology, Laboratory Studies, Pharmacology and Ultrasound Technology allowed the team to perform a variety of procedures, including: 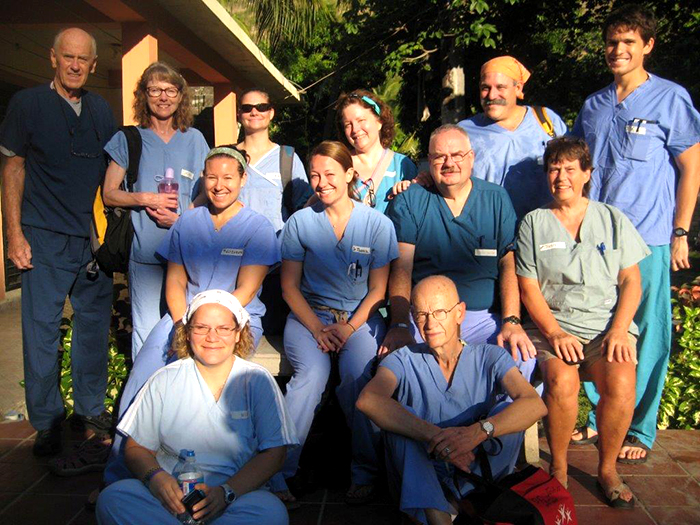 The 13 volunteers from Operation Medical included 4 surgeons, 2 anesthesia providers, 2 nurses and 5 other healthcare staff. Operation Medical would like to extend a heartfelt thank you to the team, who with their personal finances and time away from work, home and family gave back to others. They are:

During the second week of the mission, the team was able to support the efforts of a local optometrist, as the hospital started their cataract surgery program with Dr. Dennis Cowley. Dr. Dennis Purdy, an ophthalmologist from Indiana performed 40 cataract surgeries. The team was happy to be part of this effort since this was the first time this surgery had been done at HPP. We look forward to returning to the HPP in October, 2014. It is a pleasure to see the great progress in the functioning of the hospital and to be a part of it.