Although Thursday was a national holiday, care for patients did not skip a beat. The OpMed team performed 38 surgical cases and plans to complete over 200 cases by the close of the Valsad mission.

On Thursday, the team convened on the roof of Kasturba Hospital to observe a flag raising ceremony for India’s Republic Day, a major national holiday. Op Med’s president Dr. Mukul Parikh and his wife Dr. Neelima Parikh had the honor of hoisting India’s national flag. Hospital staff joined the group on the roof and sang their national anthem during the ceremony.

Breast screening services and related training for local physicians and staff continued on this public holiday in India. A Valsad school and a local employer have both sent women of the appropriate age for mammographic services. Ninety nine percent of the women presenting for screening this week are having their very first mammograms. After Operation Medical providers perform mammograms and complete ultrasounds as needed, patients leave the department with films and reports in hand.

Those patients who had been screened earlier in the week and scheduled for surgery with Drs. Barton and Carmichael presented for their procedures on Thursday. Two breast cancer patients received mastectomies and lymph node dissection for extensive breast cancers with lymph node involvement.

Further, a patient with a presumed benign lump called a fibroadenoma underwent a surgical excision with hidden scar surgery, which will be markedly less pronounced than her prior surgical breast scar. 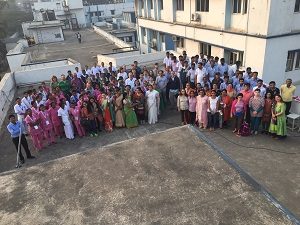