Abby has been busy volunteering and keep those of us back in the states apprised of the team’s activities. Here’s what she shared on Sunday along with a couple of photos:

“We woke up this morning feeling refreshed. We ate breakfast before heading to the hospital, where we spent several hours unpacking our supplies, organizing the operating and recovery rooms, and talking to the local doctors and nurses to try to figure out the similarities and differences between our methods and theirs. We were whisked away to a ceremony in a tent outside, where many important locals gave speeches in their local dialect, and it was very moving despite the lack of language comprehension on our end. The head doctor at the hospital, who also happens to be a religious leader, gave a speech. The crowd prayed to a portrait of man of whom the doctor is a thirteenth-generation descendant. We were greeted warmly again, with more flowers, another banner, and some Indian sweets. After a quick lunch, the cases began. The first operation was on an 8-year-old boy. We did 11 cases today, repairing hernias and performing hysterectomies and hydrocelectomies. At one point, a bovie was plugged in without a voltage adapter and it began smoking before blowing a fuse and causing all of the lights to go out briefly. It didn’t delay the team for long, however, and after the lights were turned on again, it was back to business. I had the opportunity to watch a C-section, a totally new experience for me! After we had finished up the cases, we headed back to the hotel for another delicious dinner. We are expecting to handle many more cases tomorrow, since we should be able to dive right in first thing in the morning!” 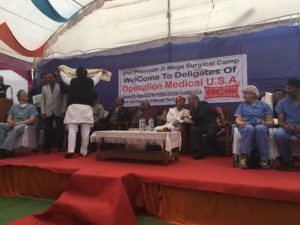 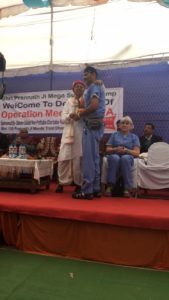 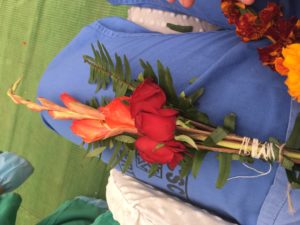