John Reidell, MD is a general surgeon with over 46 years of experience. Over the past 46 years John has worked in many states including: Michigan, Maine, Iowa, Nebraska, North Dakota, New York, Wisconsin and Pennsylvania. In addition to his many years of service as a general surgeon, John has participated in multiple volunteer surgical missions in both the Philippines and Haiti. This is John’s 5th mission to Haiti! 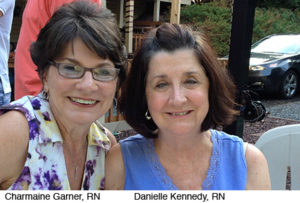 Charmaine Garner, RN, with over 40 years of experience as a surgery nurse, retired in 2011 only to become a volunteer clinic nurse at Lion Care Clinic at the Bethesda Mission in Harrisburg, Pennsylvania. Her carreer has included working at Hershey Medical Center, Frey Village and Dauphin Manor all located in the Central Pennsylvania area.

Jen Stoner, PharmD, is a community Pharmacist currently working at Rite Aid Pharmacy in Harrisburg, Pennsylvania. She attended the University of the Sciences, Philadelphia College of Pharmacy in Philadelphia, Pennsylvania where her major was Doctor of Pharmacy and her minor was mathematics. In addition to her responsibilities at work, Jen has given presentations that include topics that include: Updates in Influenza Immunizations and Youth Sexuality Retreat – STIs and the Menstrual Cycle. She has also given a presentation to a class on renal cell carcinoma.

This will be Jen’s third trip to Haiti on a surgical/medical mission!!!

Danielle Kennedy, RN has over 20 years of experience in the healthcare industry and currently works as a medical review nurse. In this role, Dani performs medical reviews of claims, records-applying professional knowledge/medical policy to ensure correct payment is made to Medicare providers. She attended Harrisburg Area Community College where she graduated with distinguished honors.